Home News How the volute housing influences the fan behaviour

How the volute housing influences the fan behaviour

The air flow is among the main features of a fan. It is one of the most relevant factors and it must be taken into account to select a fan properly, since it generates the fan power.

However, there are other factors equally relevant that intervene in the cooling system, such as distribution and the flow line direction, which depend on the configuration of the fan within the vehicle. This means that the same fan can behave differently depending on how it is installed in the vehicle.

Due to the wide range of engines that manufacturers install in commercial vehicles, the distribution of the flow generated by the fan plays a key role in the cooling of the engine block.

Among the most important aspects that intervene in this process, these should be highlighted:

In addition, all these factors influence the fan power and consumption.

At Cojali Parts we have programs for 3D modelling and CFD (Computational Fluid Dynamics) analysis, thanks to which it is possible to simulate and know the characteristics of the air flow in any situation. Through these tools, the Cooling System Design Department is capable of selecting properly the most optimal fan for any application.

Choose the fan that better adapts to your vehicle needs! 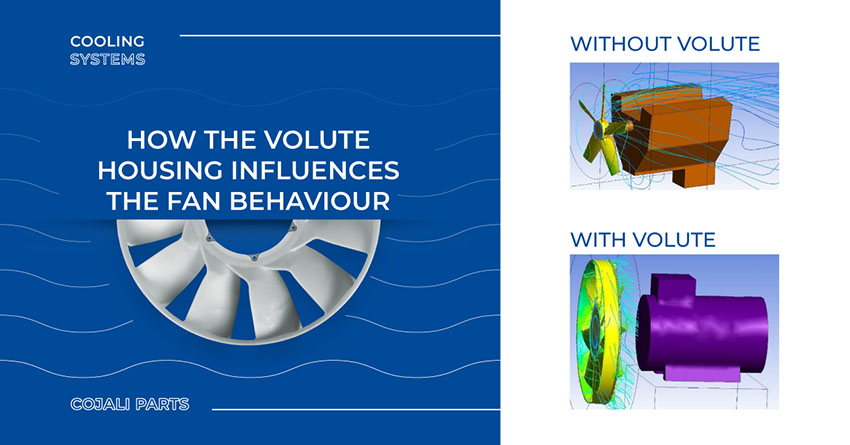 DID YOU KNOW THAT THE GEARBOXES OF COMMERCIAL VEHICLES AND HEAVY EQUIPMENT CAN HAVE UP TO 18 GEARS?

Thanks to this wide range of gears in contrast to ... Cojali will present its products and solutions for...

This page uses our own and third party cookies to improve the navigability and accessibility of our website and to optimize the user experience. You can accept all cookies by clicking on the "Accept" button or click on "Settings" to obtain more information about them and to set or refuse their use.
ACCEPT